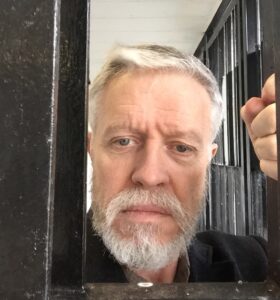 David Manderson is a writer and former academic.  He is currently chair of the Writers for Peace committee. He has published short stories, essays and poems in a wide variety of small magazines and anthologies. His novel Lost Bodies (Kennedy & Boyd) was published in 2011. He ran the Real to Reel Short Film Festival at the Glasgow Film Theatre in Glasgow until 1999 and Nerve Magazine until 2001. Later, a creative practice PhD took him into academia where he published articles and textbooks on Scottish films, creative writing and walking, and Scottish Miserablism. His poem Expedition, animated by Samantha Hendry, won a Royal Television Student Award in 2019. In 2017 he was the recipient of a Robert Louis Stevenson Fellowship from the Scottish Book Trust. He is currently completing a book on the work and life of Alan Sharp for Peter Lang publishers