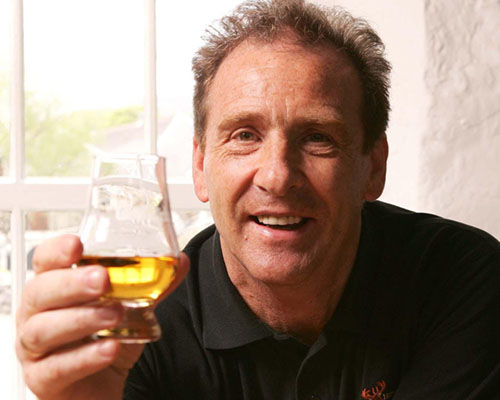 Ian started working in the whisky business in 1971 where he worked at Blair Athol Distillery, having worked in various parts of production he was promoted into the Production Manager role in 1982.

Ian was an active member of Dufftown 2000 who were responsible for setting up the Dufftown Whisky Festivals now happily absorbed into the very successful Spirit of Speyside Whisky Festival.

In 2006 Ian moved into the role of Global Ambassador for Glenfiddich where the ambassador team increased progressively to 20, he retired from this role in 2016.

Ian was invited to become a Keeper of the Quaich in 2008, an organisation created to promote the long term global success of Scotch Whisky.

In 2014 Ian was invited to sit in the panel of the HKIWSC as their International and head judge for the Spirits section.

In 2016 Ian was inducted into the Icons of Whisky Hall of Fame.

Ian is married to Anneke and has two grown up children and seven grandchildren, he currently lives in Pitlochry, deep in the heart of Scotland.

Thanks to the growing success of Glenfiddich and Balvenie, Ian is spending an increasing amount of time dealing with our HNW guests at Glenfiddich Distillery in his new role as Prestige Whiskies Specialist.

When not nosing and tasting Glenfiddich, or working on his numerous community projects, Ian likes to spend his precious free time playing golf at his favourite courses around Scotland and walking his dogs in the beautiful Highland countryside that surrounds his home.