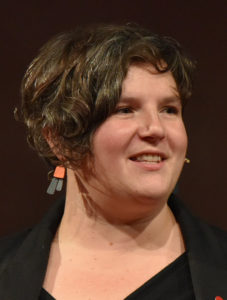 Creative Informatics aims to bring the city’s world-class creative industries and tech sector together, providing funding and development opportunities that enable creative individuals and organisations to explore how data can be used to drive ground-breaking new products, businesses and experiences. The project is nurturing local talent through five key funding programmes and regular events that support Edinburgh’s creative industries to do inspiring things with data.

Prior to joining Creative Informatics and the Centre for Design Informatics, Nicola undertook business development and managed innovative digital projects at EDINA, including technical work on the award-winning Curious Edinburgh mobile app and  the University of Edinburgh Internet of Things Research and Innovation service.

Nicola is Co-investigator (PI: Louise Connelly) on the Managing Your Digital Footprint research strand and co-tutor of the Digital Footprint MOOC. This work on digital tracks and traces has been featured in several successful Cabaret of Dangerous Ideas shows at the Edinburgh Festival Fringe. She has also shared her expertise in social media through training and consulting for audiences within and beyond higher education. In October 2015 Nicola was named as one of Jisc’s 50 most influential higher education (HE) professionals using social media.

Nicola has been a guest contributor and tutor for MSc in Digital Education’s Introduction to Digital Environments for Learning module, based at the School of Education (College of Humanities and Social Sciences).  Nicola wrote and and lead the Role of Social Media in Science Communication and Public Engagement module, part of the MSc in Science Communication and Public Engagement, based at the School of Biomedical Sciences (College of Medicine and Veterinary Medicine) from 2012-2015.

Nicola has previously worked on the teams for the AHRC funded Engaging Edinburgh projects, specifically the the University of Edinburgh Internet of Things Research and Innovation service; the award-winning Curious Edinburgh project and mobile app; the Site2Cite (web archiving and persistent referencing) project; the EO4 Cultivar project (funded by the UK Space Agency); the AHRC funded Palimpsest/LitLong project; the EU FP7 funded COBWEB: Citizen Observatory Web project, including oversight of an innovative comic to disseminate the project work; the Digging Into Data project Trading Consequences project; and the Jisc funded AddressingHistory project, alongside many other of EDINA’s own services and projects. From Feb 2015-August 2016 Nicola managed Jisc MediaHub, an online multimedia service for the UK Higher and Further education sector.