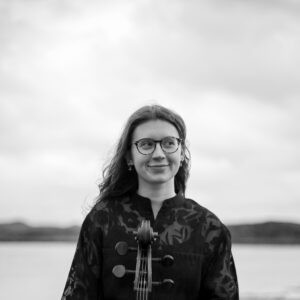 Rosie enjoys a varied musical career as a soloist, chamber musician, orchestral player and teacher. She is especially passionate about the integration of music into all communities and enjoys working with organisations such as TiPP (Theatre in Prisons and Probation), SoundUp Arts, The Messengers, Hackney Music Service, Hanson Community Arts and the Benedetti Foundation. In 2016, she began her undergraduate at the Royal Northern College of Music where she studied with Hannah Roberts and Jennifer Langridge. She is currently studying at the Guildhall School of Music and Drama with Timothy Lowe.

Rosie is a founder of the Larisa Piano Trio, who are an award-winning chamber group formed in 2016 at the Royal Northern College of Music (RNCM) in Manchester. Holders of the prestigious St James’s Prize as well as the Christopher Rowland Chamber Music Ensemble of the Year Award, they have had many competitive successes. The trio were invited to play in Wigmore Hall in a masterclass with György Pauk. Rosie has been accepted onto the NEXT scheme with the Birmingham Contemporary Music Group, with whom she performed in Birmingham Symphony Hall, BSO and the Birmingham Conservatoire.

Highlights of her orchestral experience include being invited to play with The Manchester Camerata as part of their professional experience scheme and playing in Leeds Town Hall as part of Nicola Benedetti’s Four Seasons Tour. She played again with Benedetti in a string orchestra under Leonard Elschenbroich, which was featured on Classic FM. Always eager to combine her love of the arts with her music making, in 2019 Rosie created the film and musical score ‘Lines’. She has recently composed a piece written for solo cello in collaboration with Colin Blundell, which she recently premiered the Belfry Centre for Music and Art in 2020.