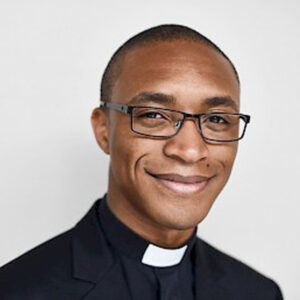 Jarel is a British-Born Jamaican and grew up in West London where, with his elder sister he was raised by his Grandmother. Sensing an early call to ordained ministry, Jarel began preaching in the Ealing Trinity Circuit of the Methodist Church in 2006 and later trained for ordination at Wesley House, Cambridge from 2010-2013. He has served Methodist Churches in Cardiff, South Wales and South East London in a variety of contexts and served on the Methodist Council, Methodist Conference and the Equality, Diversity and Inclusion Committee of the Methodist Church.

I’In 2020 Jarel became an Anglican and having served in the Parish of Putney (2019-2020) where Inclusive Church began, and as Associate Chaplain at King’s College London (2019-2021) he is the Assistant Curate at St Botolph-without-Aldgate in the Diocese of London.  He is passionate about issues of justice, particularly in the areas of race and sexuality. Jarel has an interest in gender, desire and ethnicity in Late Antique Egypt and is currently completing post-graduate work in Theology as well as writing a book with SCM Press on Race, Religion and Sexuality in Britain looking particularly at Black British Queer Christian experience. He contributed a chapter in the Book of Queer Prophets which was published by Harper Collins in May 2020.

Prior to ordination, Jarel studied music in London and Paris and he now lives in North West London. He is committed to a Church which truly includes all of God’s people, offers embrace and welcome to everyone without reserve, and speaks prophetically into the issues of the world.